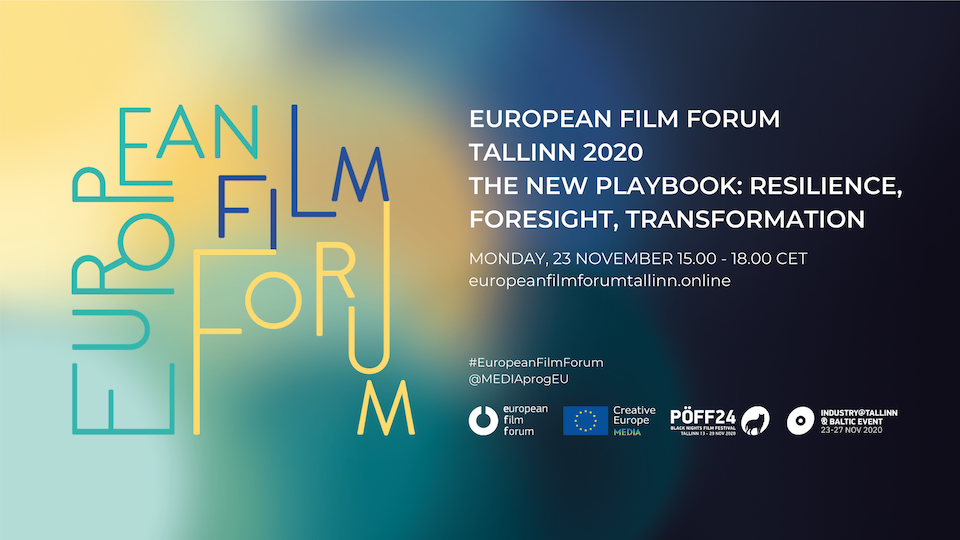 The COVID19 outbreak has severely hit the audiovisual industry, with some estimates projecting losses up to EUR 24 billion in the next five years. Yet, despite the dramatic recession, a new-generation industry and business leadership is emerging to steer the cinema sector out of the crisis through actions of resilience, foresight and transformation of organisations, formats and business practices.

The European Film Forum (EFF) will return to the Tallinn Black Nights Film Festival on 23 November for a half day of high-level debates and case studies focusing on how the industry can best overcome its challenges. The conference will address questions such as why and how to rebuild the broken value chain between creators, producers, sales and audiences. In addition, it will look at the new data driven playbook for European film and content marketing, and will showcase a new initiative to launch globally the Europe-built copyright infrastructure.

Furthermore, Adrian Wooton (CEO of Film London) will present the results of the largest industry consultation done by his organisation with the aim of resuming film productions in the city. The directors of the International Film Festival Rotterdam, the Udine Far East Film Festival, and the New Horizons Polish Days will explain how their events persisted during the crisis and will highlight the best strategies and actions to ensure the success of future festivals. Then, Robert Wolcott (a worldwide acclaimed innovation scientist and founder of Twin - formerly Kellogg Innovation network) will discuss in conversation with Sten Saluveer (EFFT curator) the basis of his work with political and Fortune 500 leaders across the globe, as well as the skills and actions required for the post-COVID era. Finally, the European Commission will present the novelties of the upcoming Creative Europe MEDIA programme, running from 2021 to 2027.

“The European Commission, via the new Creative Europe MEDIA programme and other supporting actions, will help the audiovisual ecosystem throughout the crisis and beyond to become more resilient and globally competitive. We will support the sector to recover (by compensating the losses and providing liquidity), to transform (by investing in a green, sustainable, digital and resilient industry) and to feel empower (by allowing more innovation and greater content access),” says Lucia Recalde, Head of Creative Europe MEDIA at the European Commission.

“The dramatic shifts in the global film industry have not come as a full shock as they have been here for a long time. That said, they were drastically accelerated by COVID19 which also added a long-term impact. Thus it is clear that this new reality will require not only financial but also new leadership skills and resources for the industry to revitalise. Thanks to our long-term collaboration with the European Commission, we have now the opportunity to bring this very timely and pressing topic to the forefront of this year's EFFT at the Black Nights Film Festival,” adds Sten-Kristian Saluveer, European Film Forum Tallinn Curator.

The European Film Forum in Tallinn will take place online and the live stream will be accessible to everyone at industry.poff.ee. The full programme of the EFF is already available at https://www.europeanfilmforumtallinn.online/

The European Film Forum (EFF) was introduced by the European Commission in its 2014 Communication on European Film in the digital era, as a debate and discussion platform on the future evolution of European cinema and film industry. The EFF in Tallinn focuses on innovation between cinema, digital and the start-up sectors, and ties into Estonia’s position in digital leadership in the world.