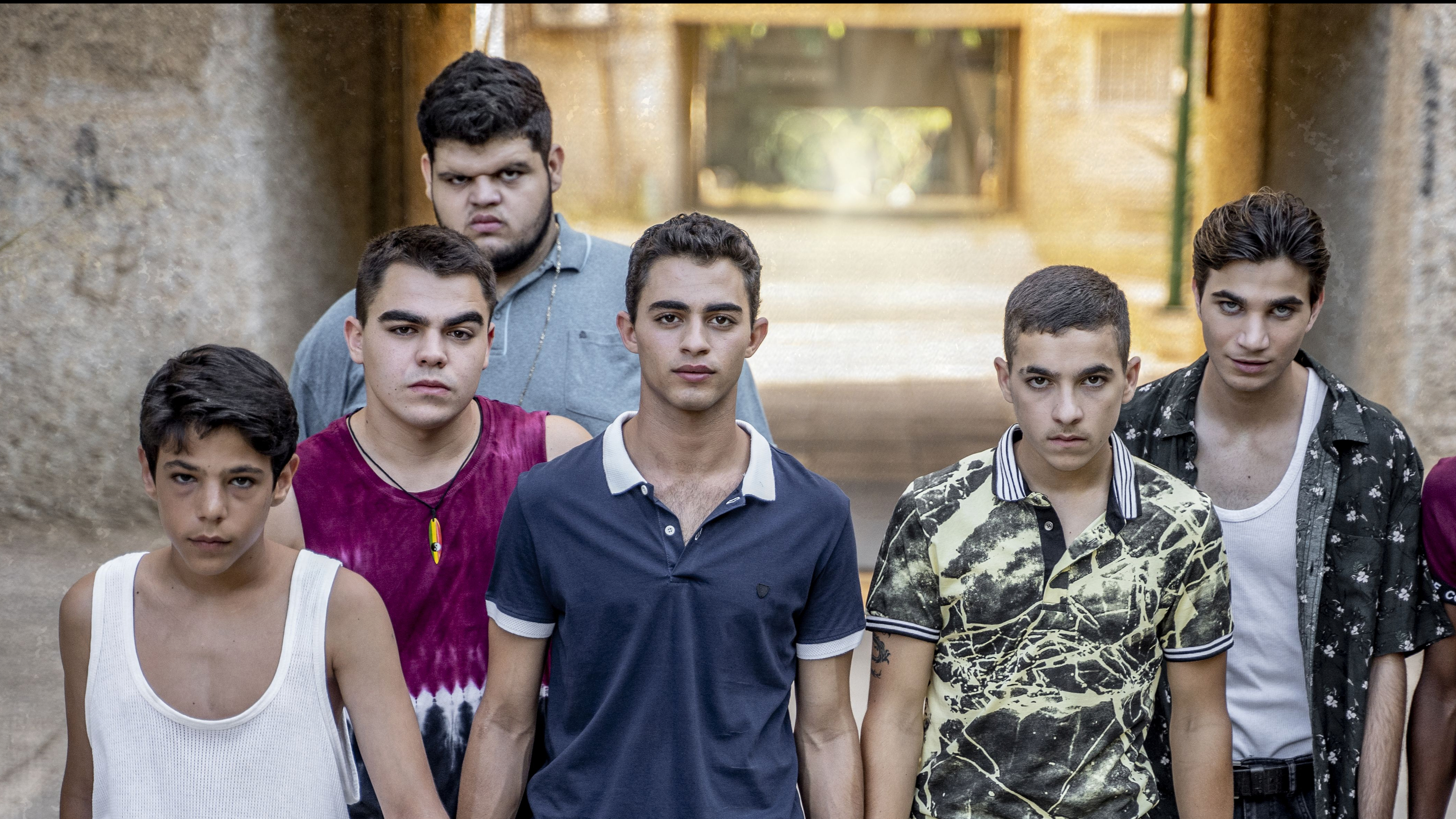 During Industry@ Tallinn & Baltic Event you are more than welcome to take a deep dive into the world of series! Just log into ProScreen. ProScreen is powered by Elisa Stage - a VoD platform with Studio Grade DRM, helping us to deliver an exceptional viewing experience.) with your Eventival account and you are ready to go! Here is the list of the latest series available since 19 November to 26 November.

Title: Guilt
Country: Denmark
Genre: Comedy
Year: 2020
Number of episodes x length: 9 x 5-6’
Short logline: GUILT is a study of the endless problems of a modern relationship. We are introduced to the young, yet a settled couple, who are together for reasons they seem to not quite remember anymore.

Title: Pushers
Country: Israel
Genre: Drama
Year: 2021
Number of episodes x length:Season 1 | 9 x 40'
Short logline: A moving, funny and painful coming-of-age story of young teens from a tough neighbourhood, who decide to make money the only way they know how – selling drugs. Through pushing drugs and pushing boundaries, they try to change the reality they grew up into and deal with the consequences of their actions.

Title: Insomnia
Country: Russia
Genre: Drama, thriller
Year: 2021
Number of episodes x length: 8 x 60’
Short logline: Yuri is a successful psychiatrist and hypnotist, a committed non-believer, capable of rationalizing anything…except for his own nightmares, including his late ex-wife, some red-haired beauty and a strange infinity sign symbol. When a mother of a boy tormented by nightmares turns to Yuri for help, he tries to untangle this case. In the process of treatment, Yuri comes across evidence of reincarnation, while the boy himself gives him clues to the mystery of his own nightmares.

Title: Mental
Country: Russia
Genre: Drama, dark comedy
Year: 2021
Number of episodes x length: 8 x 60’
Short logline: Dmitry is a psycho, though only his therapist knows about this secret. And while Dmitry has a great, high-paid job, the best ideas he gets from the voice in his head. Actually, several voices. However, to stay sane, Dmitry has to constantly keep the population of his imaginary friends at bay and steer clear of new characters settling in order to become normal and win back custody of his son.

Title: The Vampires of Midland
Country: Russia
Genre: Fantasy / detective / comedy
Year: 2021
Number of episodes x length: 8 x 52’
Short logline: Grandpa Slava is the oldest of the Midland vampire family. They live quietly. They live by the law. They live the unremarkable life of an ordinary Russian family and they never kill humans – ever. Although, of course, everyone knows they drink blood. And when some lifeless corpses are found in a birch grove near Smolensk... their peaceful life falls under threat.

Title: Agency
Country: Latvia
Genre: Art house
Year: 2020
Number of episodes x length: 10 х 60’
Short logline: Film's events take place in Riga and Latvia in summer 2020. The plot revolves around an advertising agency — a typical office where professionalism collides with ennui, romance and existential confusion. The catalyst for the plot is a mystery that expands into a thriller.

Title: Crime solving for beginners
Country: Latvia
Genre: Drama, Crime drama, Investigation, KGB Spy story
Year: 2021
Number of episodes x length: 7 x 45’
Short logline: This is the story about how the new country matured in the 1990s, where we come to
the realization that due to certain forces and their influence, the people who took power never had the goal of Latvian independence.

Title: The Last Days of Gilda
Country: Brazil
Genre: Drama
Year: 2021
Number of episodes x length: 4 x 25’
Short logline: Gilda loves cooking, men and life. But for her narrow-minded, religious neighbours this self-confident, independent woman who butchers pigs in her garden and has more than one lover, is increasingly becoming a thorn in the flesh.

Title: Arctic Circle
Country: Finland
Genre: Thriller
Year: 2021
Number of episodes x length: 6 x 50’
Short logline: Two murder inquiries combine into one and reveal an ancient secret society of rich and powerful men who take justice into their own hands. Nina will have to confront them, as well as her own dark family secret.

Title: Emily. Queen of the Press
Country: Latvia
Genre: Historical drama
Year: 2021
Number of episodes x length: 7 x 54’
Short logline: The true story of Emīlija Benjamiņš (Emily Benjamin) – a woman who was in turns exalted, envied, hated and adored. A strong woman who builds a press and fashion kingdom, but ultimately even her wealth and influence cannot save her from betrayal.

Title: Max Anger - With One Eye Open
Country: Sweden, Lithuania, Russia
Genre: Drama, thriller
Year: 2021
Number of episodes x length: 8 x 45’
Short logline: Max Anger (Adam Lundgren) is a former military man who has finally found love in his Russian colleague Pashie (Evin Ahmad). But when Pashie suddenly disappears without a trace in St. Petersburg, Max immediately sets off in search of her, but it quickly turns into a hunt for life and death that leads him to a horrific discovery that can change the world order.

Title: 12 Summers Ago
Country: Estonia
Genre: Drama
Year: 2021
Number of episodes x length: 6 x 45’
Short logline: 12 Summers Ago is a psychological thriller weaving between the past and present. It tells the story of the Kurms family whose lives irrevocably change when two-year-old Tanel is killed by a gunshot. Whilst on their family holiday on Saaremaa 12 years later, they come across a man that looks just like the boy’s killer. Gripping, fast-paced and tense, the series keeps the audience on edge until the final reveal.

Title: You shall not lie
Country: Spain
Genre: Drama, Thriller, Crime
Year: 2022
Number of episodes x length: 6 x 50’
Short logline: A video of a high school teacher having sex with one of her students goes viral and all hell breaks loose in upscale, coastal Belmonte. THE PIER’s Irene Arcos stars in a dramatic new guessing game of fragile truths and hidden lies from Pau Freixas, co-creator and director of RED BAND SOCIETY.

Title: Vertinsky
Country: Russia
Genre: Drama, biography
Year: 2021
Number of episodes x length: 8 x 60’
Short logline: An eight-episode series narrate the dramatic and unpredictable tale of an outstanding Russian poet and performer, an idol of the first half of the twentieth century: Alexander Vertinsky.
The series is based on the life story of a famous poet, who lives and thrives on the background of crucial historical events of the century. We follow Vertinsky’s path from an unknown young writer and beggar, to a famous and respected performer who is forced to wander in exile for decades before he has a chance to get home.

Title: Besa
Country: Serbia
Genre: Crime drama
Year: 2021
Number of episodes x length: 10 x 45’
Short logline: At the beginning of the second season, and three years after the first, we find the main character Uroš Perić in Estonia, living in a witness protection program. After forcing Uros to testify against Dardan, Petrit Koci, an Interpol inspector, not only achieved his life goal, and arrested the greatest Balkan drug lord, he became a high position official with a residence in Vienna.

Title: TBH
Country: Czech
Genre: Crime drama
Year: 2021
Short logline: In the wake of a shooting at a high school in Brno, what happens to a community where, until now, all the shots were called by members of a floorball team and their admirers, the all-girl Bitchez gang? Czech Television’s first original web series tells a ten-part story about finding boundaries in the painful world of adolescence and social networks. The title uses the abbreviation TBH, which means “to be honest” in online slang. However, it is often used in the opposite sense, when the speaker wants to disguise a lie or twist the truth. The series is based on extensive research carried out using special questionnaires distributed directly among the target audience in selected schools.

Title: Still Waters
Country: Estonia
Genre: Drama
Year: 2021
Number of episodes x length: 8 x 30
Short logline: Upon arriving at a new bilingual school far from the capital city, a teenage girl from an ethnic minority background finds herself blackmailed when someone launches an online smearing campaign against her. As the events spiral into maddening terror threatening to destroy her fragile friendships and new stepfamily, she is forced to fight back with all means necessary.

Title: In the Line of Fire
Country: Estonia
Genre: Drama, thriller
Year: 2020
Number of episodes x length: 6 x 44
Short logline: Inspired by real life events, the 6-episode action-drama "In the Line Of Fire" brings out some sore questions of our time. An Afghan War veteran, deeply disappointed in life, starts to detonate bombs in Tallinn, the capital of Estonia, trying to "create a better world". The cat and mouse game begins between him and a controversial top investigator of Estonia’s Internal Security Service.

Not sure how to watch series on ProScreen? Here are some tips!

For online streaming of films and series we use a web platform exclusively reserved for film guests, industry professionals and accredited press - proscreen.poff.ee. ProScreen is powered by Elisa Stage - a VoD platform with Studio Grade DRM, helping us to deliver an exceptional viewing experience.

ProScreen will be accessible using your badge number, which was sent to you in an email with the subject: Virtual Instructions for professionals 2021 for Industry@Tallinn & Baltic Event. You can also use the number on your physical badge if you are attending onsite in Tallinn. The platform will be open from November 16 and the selection of series is available since 19 November.

It only takes four steps to watch the series:

If you have any questions related to using ProScreen, feel free to send your questions to hybridevents@poff.ee or festivalassistant@poff.ee.