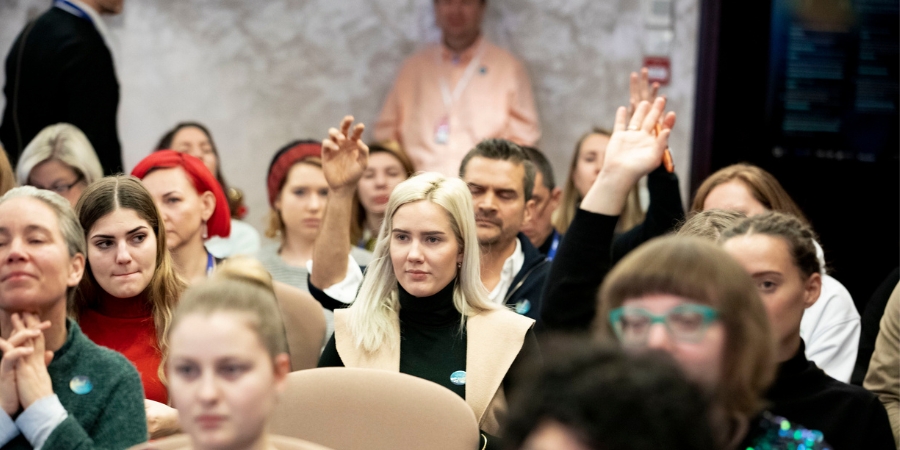 Check out the catalogue

With the continuous cooling of the economic environment, the energy crisis, the Ukraine war as well as the ripple effect of the COVID pandemic, the European film and content industries will be facing a challenging year ahead. Drastical subscription-cutting, a peaking competition for screen and attention time, the volatility of acquisitions, and the fragility of the value chain and acquisitions will be set for a wide-reaching reconfiguration of the European audiovisual industry, especially for small and medium-sized players. The ecosystem’s fragility is also influenced by the fact that member states and industry funding institutions, in the state of complex geopolitical affairs, are facing a tough road ahead with limits on available support schemes and industry-boosting measures to deploy.

Yet paradoxically, it is a critical time for the European audiovisual industry to sustain itself and step up and explore and learn from the lessons of the previous crisis a decade ago. European content is critical in maintaining and promoting European values and democracy at a time when those are increasingly contested; European content offerings - whether in festivals and markets, theatrical or digital are called in societies under pressure, the transformation of the industry towards innovation, out of the box business models and the greening is becoming vital in the environment of energy challenges. The European approach and upskilling are critical in shaping the transformation to exponential technologies such as Virtual Production, Metaverse, and Web3 that will significantly transform the industry operational model in the forthcoming years - whether in values, core technologies, talents, and data spaces. And last but not least, the industry needs to maintain solidarity with Ukraine - in strategy and action, so that the voices from the front lines protecting the European way will be seen and heard.

Supported by the European Commission, Creative Europe MEDIA, and organized in partnership with the Black Nights Film Festival and its Industry@Tallinn & Baltic Event Platform, Europe in Focus: Industry Innovation Forum comes to Tallinn on 22 November 2022. 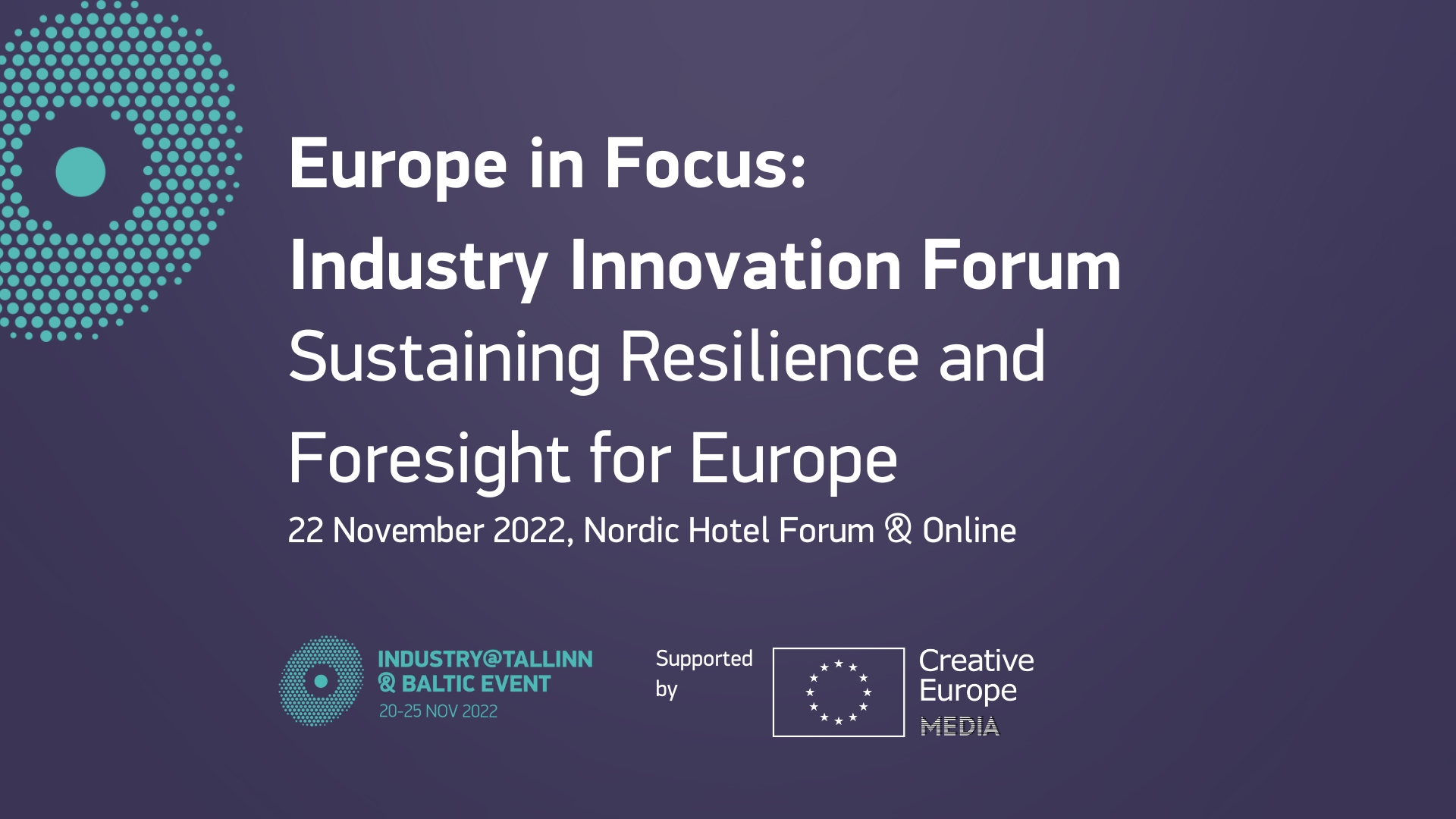 Join the half a day executive level forum between policymakers, industry leaders, and innovators to explore debate and outline new policy and business frameworks and cases in the following areas:
How are European film funds and financiers, as one of the key shapers of the ecosystem, addressing the challenges and transformation in Europe’s audiovisual landscape?

Discover new frameworks and needs for industry upskilling (such as engagement of HEIs and public-private partnerships), lessons learned from European independent stages, exploring the effect of the monopolization of European VP infrastructure and talent by streams, impact on funding and rebate structures, and lessons learned from creating a European virtual production ecosystem.

Increasing industry-wide cooperation with the Ukrainian audiovisual and innovative solutions in the film and AV sector.

How can we establish trusted networks of collaboration in cinema and media-related startups, AI, and synthetic media, as well as the frameworks and best practices from Ukraine benefiting the European ecosystem?

**Exploring and setting the principles of the European Immersive and Web3 technologies for the audiovisual industry.*'

What types of values and standards the European way of the future of Immersive Media, Metaverse, and Web3 need to encompass? Who are the key players for technologies from platforms, core standards, and monetization? What technologies and developments will influence the European audiovisual sector, and which focus area is the most visible gains for Europe’s AV sector.

What are the latest out-of-the-box initiatives and examples of the industry’s collaboration with high-potential startups and upskilling & training programs for data readiness, and what can we learn from those to scale innovation potential in the European AV ecosystem?

The mini-summit is supported by the Creative Europe MEDIA program of the European Commission.

15:05 Introductory remarks by Piret Hartman, the Minister of Culture of the Republic of Estonia

Spanish-born Lucia Recalde Langarica is Head of the unit "Audiovisual Industry and Media Support Programmes" in the Directorate General (DG) for Communications Networks, Content and Technology (CONNECT) of the European Commission. Prior to that, she was a part of the management of the DG for Education and Culture (EAC) as Head of Unit for Higher Education, Innovation, Entrepreneurship, and the EIT (the European Institute for Innovation and Technology). Ms Recalde joined the European Commission in 1995 and until 2006 served the DG for Employment and Social Affairs in various positions. She started her career as policy officer at the Directorate of European Affairs of the Basque Government.

Sten-Kristian Saluveer is Europe and Japan-based film and technology visionary, genre film producer, innovation strategist, and entrepreneur. Sten is the creator of the first media technology & startup innovation hub Storytek in North Eastern Europe. He is serving on the Advisory board at the Future Hubs of the Flemish Public Broadcaster VRT together with innovation leaders from BBC, RTBF, YLE, Mediahuis, MCB, and others. Sten is also the Strategic Advisor and head of the innovation track - NEXT - at the world's flagship film industry platform - Marche Du Film of the Festival de Cannes. He frequently facilitates ideations and top conferences on the future of storytelling, technology, and creativity while advising several enterprises and governments on storytelling, media, innovation, and technology.

Anna is the Head of Ethics and Partnerships at Respeecher, an Emmy-awarded voice cloning technology based in Ukraine. Anna is a former Policy Advisor at Reface, an AI-powered synthetic media app, and a tech co-founder of the counter-disinformation tool Cappture funded by the Startup Wise Guys accelerator program. Anna has 11 years of experience in security and defense policies, technologies, and resilience building. She is a former Research Fellow at the International Centre for Defence and Security in Tallinn and Prague Security Studies Institute.

Anna Schoeppe studied history and German studies at the Technical University of Berlin and soon laid the foundation for her career in the film industry: After working at the European Film Academy in Berlin and at Filmakademie Baden-Württemberg, she took over the lead at Kuratorium Junger Deutscher Film in Wiesbaden. In 2017, she was appointed its director. Since 2020, Anna Schoeppe has been the Managing Director of HessenFilm und Medien, where she opens up new artistic perspectives, promotes young talent, and advances the development of the film industry in the region.

Céline studied Film in France at Montpellier and Lyon University. After a Master’s degree in distribution, she started working in international sales in Hong Kong and later in Vancouver. Three years later, she joined Logical Pictures, in 2016, right after the French company’s creation, and worked as an international coproducer on projects like THE INNOCENTS by Eskil Vogt (Cannes Un Certain Regard 2021), PLEASURE by Ninja Thyberg (Sundance 2021) or TCHAIKOVSKY’S WIFE by Kirill Serebrennikov (Cannes Official Competition 2022) or as a lead producer on SPECTRE: SANITY, MADNESS & THE FAMILY by Para One. She is now Head of Investments and International Coproductions for the company and keeps working on bold, author-driven feature films, particularly on elevated genre films. The company supports many first-time directors, helping them grow within an environment of companies, including French distribution (The Jokers Films), production of commercials (Loveboat), or international sales (Pulsar Content) on top of production.

With over 20 years of experience, Elisa operates as a consultant in corporate finance for media & entertainment and is a senior advisor for the Finnish venture capital fund manager IPR.VC. She has managed investment funds and led financial transactions in M&E of over $800m. õ Over the years, she has been involved in providing corporate and project finance for studios such as Focus Features, Disney, Lionsgate, Entertainment One, MRC Entertainment, and, in Europe, Europacorp and Wild Bunch.

Marko has worked for the past 15 years in different leadership positions in tech startups with a focus on sales and customer relationships. He came to Zoan a little over three years ago to develop the real-time game engine business and has worked with Fortune 500 companies e.g. Blackrock, Meta, and Amazon. Recently, Zoan has started building its own photorealistic metaverse platform called Cornerstone. which Marko sees as the perfect opportunity to go even deeper into what he is passionate about. This year he has been traveling around the world meeting with the most interesting web3 projects and content creators at the most prominent web3 events to present Zoan's vision of the Metaverse.

Gaëlle is an award-winning Immersive Creator and Film Writer & Director, Her projects have been selected at Sundance, SXSW, Venice Biennale Venice Immersive, LSFF, and many more. She is a BAFTA Connect member, a WGGB member, and is a 2022 Berlinale Talent. Her first VR film was MECHANICAL SOULS in 2019, and in 2021 she co-created the VR animated series (HI)STORY OF A PAINTING. The second episode of the series won the Special Jury Recognition for Immersive Storytelling at SXSW 2022. Bilingual in French and English, she works in both languages and is always up for a new challenge.

Sofie Hvitved is a Futurist and Head of Media at the Copenhagen Institute for Futures Studies, where she is currently working on the future of the Metaverse and how it will affect our lives and businesses. She is strongly engaged in the intersection between media, technology, and entertainment and has a solid strategic background in the media industry, among others in DR (Danish Broadcasting Corporation). She is also a member of the Danish Media Board under the Minister of Culture. She has lived and worked in various cities around the world in Europe and South America and is currently living in Copenhagen. She has an MA in Media Studies from Aarhus University, Denmark.

Louisa Bremner is a Virtual Production Supervisor who has worked on films and TV series such as “House of the Dragon,” “Matrix 4,” and “Death on the Nile. “ From her time at DNEG and Lux Machina, she has worked across a full range of virtual production toolsets, from virtual scouting, facial performance, mixed reality (simulcam), and in-camera VFX LED workflows. Over the last year, Louisa has been a Virtual Production Supervisor for Lux Machina, working on some of the biggest Virtual Production stages in the whole of Europe, and the world. Being at the forefront of these technologies, Louisa’s passion is working with Directors and DOPs to find the best ways of using Virtual Production technologies to enhance their experience and creatively improve workflows. She is a firm advocate of training people to use Virtual Production in their workflows, whether it is students coming into the industry, indie film developers looking for cost-effective solutions, or veterans looking for cutting-edge technology.

Jannicke Is a Norwegian award-winning Film Director & Cinematographer specializing in fringe technology & next-gen movie productions. Jannicke has developed a niche working in the raw elements of remote and hazardous environments, creating successful next-gen film productions in the arctic, underwater, aviation, and space. Her innovations include work with wildlife pioneer David Attenborough, Film Director for legendary rock band QUEEN first ever VR production, AR exhibit installations for the Apollo11 50th anniversary at the NASA Kennedy Space Center, virtual cinematography for Netflix’s sci-fi thriller STOWAWAY, and Guinness World Record holder for the fastest circumnavigation of Earth via the North and South Pole, live-streaming the entire flight-mission via GX-satellites. She is the recipient of the first-ever European Society of Cinematographers Award for Extraordinary Technical Achievement; in 2017, she was named one of Norway’s most influential women in tech, and in 2019 one of the UK’s most influential women in tech. Her work has been featured in publications such as Forbes, Wired, Variety, and Teen Vogue.

Maciek is the first Virtual Production producer in Poland, the CEO of PixelRace – the virtual production software company, and CTO of ATM Virtual Studio – the first and most advanced VP Studio in Poland. He is currently acting as a script consultant for virtual production technology in storytelling. Maciek has 20 years of experience in international film production and film technology. He believes that it’s all about exploring and pushing forward the boundary of the connection between the digital and physical world and believes in Arthur C. Clarke's law, where: Any sufficiently advanced technology is indistinguishable from magic.