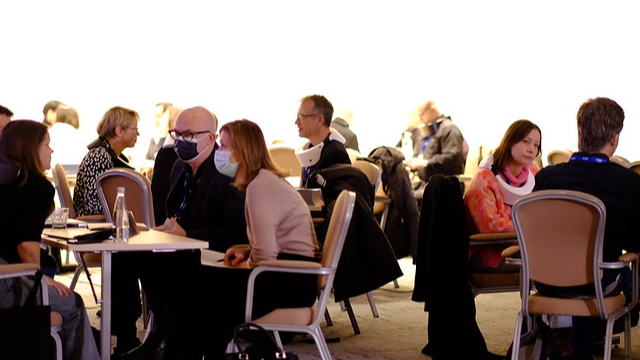 It also strives to help finance and distribute films from the region, promote local professionals, filmmaking opportunities and service providers, raise competitiveness and facilitate networking between the region and the world. Baltic Event has put special emphasis on creating a bridge between Eastern Europe and the West, for which the geographical location of Tallinn makes it an ideal place.

List of the structures/services available to the accredited participants:

Producers, commissioning editors, sales agents, distributors, representatives of film festivals and film funds, financiers and other audiovisual professionals are entitled to attend Baltic Event for the purposes of enlarging their professional network, finding suitable projects for their projects / slates. Invitations to the aforementioned industry representatives who are selected by Baltic Event management are sent out in September. New applications will be reviewed by Baltic Event management on a first-come, first-served basis and approved at the discretion of Baltic Event in accordance with these Regulations. As the number of participants is limited, Baltic Event reserves the right to not approve all applications.

All participants must fill the accreditation form provided by Baltic Event representative upon confirmation of attendance. The accreditation fee varies from 75€ to 100€ per person according to the category of the invitation. An accredited guest has access to all the Industry@Tallinn & Baltic Event services and events. Detailed information will be available upon opening of the Accreditation in September. The participation fee is waived for Ukrainian participants and project holders.

In 2022, Baltic Event will select up to 12 fiction film projects in development to the Co-Production Market section.

In order for a Film Project to qualify for admission to Baltic Event Co-Production Market in regard to these Regulations, it has to meet all of the following conditions:

Since 2021, Baltic Event Co-Production Market has a partnership with Film London Production Financing Market (PFM): one project selected for the Baltic Event will have the chance to participate in PFM the next year. The selection of the project will be made in collaboration with the PFM management. Please read more about the PFM here

The Applicants who want to participate in the Co-Production Market with a Film Project, which will be in line with the above stated requirements, must provide the following documentation (in English) fully attached to the application:

RIGHTS AND THE CHAIN OF TITLE

The Applicant guarantees that it holds the rights relating to the project, for which the Application is being submitted.

In case the Film Project has numerous producers they amongst themselves have to elect one producer that will serve as the Applicant in regard to these Regulations and will represent them in relations with Baltic Event.

Film Project as well as an authorization of representation from the other authors.

The competent law for regulation of copyrights in relation to these Regulations is the Law on Copyright of the Republic of Estonia.

All properly filled and complete applications shall be reviewed by the Selection Committee appointed by Baltic Event management.

The Selection Committee consists of five people – an active producer with international co-production experience, an international sales agent, a senior festival executive, a market representative, and a script consultant. The Selection Committee shall evaluate the projects through different angles in their artistic, financial, and marketing capacities in accordance with these Regulations.

The main selection criteria for the Co-production market is an appealing story for international markets, filmography of the director - as our objective is to promote new talent -, the experience of the producer to successfully carry out the project, and the ability of Baltic Event team to find suitable parties to finance, co-produce, and sell the project. The Applicant must agree that Baltic Event shall have the right to monitor the project regularly throughout their production and distribution.

The final selection will be made in September, and all the applicants will be notified of the results prior to the public announcement.

Each Applicant that gets chosen to participate in Baltic Event is required to cooperate with the employees and persons of responsibility of Baltic Event during the entire course, and in all respective phases of Baltic Event.

APPLICANT’S OBLIGATIONS AFTER THE COMPLETION OF THE FILM PROJECT

In the event the Applicant’s Film Project is approved for Baltic Event, the Applicant guarantees the following:

FINAL PROVISIONS
The official language of Baltic Event is English.

In regard to all matters not expressly settled by these Regulations, good business practices and current regulations of Estonia and its entities are to be applied.

Any amendments and supplements to these Regulations shall be made by Baltic Event management.

By submitting an Application the Applicant agrees to all provisions of these Regulations.

These Regulations come into effect from the day of their publishing on the webpage http://industry.poff.ee/, and are effective beginning on the 15 of April 2022.