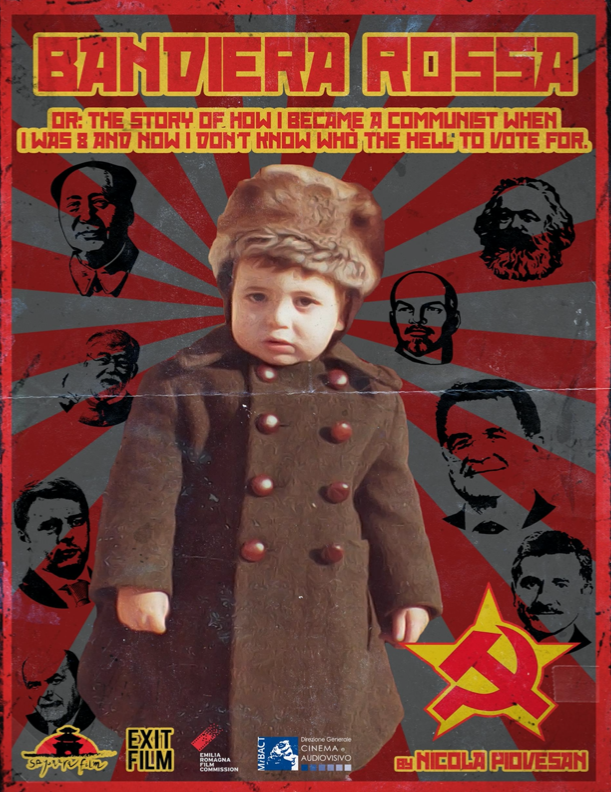 BANDIERA ROSSA OR: THE STORY OF HOW I BECAME A COMMUNIST WHEN I WAS 8 AND NOW I DON'T KNOW WHO THE HELL TO VOTE FOR.

Tallinn, Estonia, 2020. Nicola, an 8-year-old boy, is in deep political crisis. All over the world populist and sovranist parties are flourishing, while the consent to the International left wing is strongly falling. From the capital of Estonia, freed from Communism and presently an example of modernism and innovation, a flashback begins in the 1980s in Italy, maybe the only western nation where Communism really worked and is still idolized nowadays.

Nicola Piovesan was born in Venice, on the 1st of April, 1979. He graduated in Cinema in 2004, at Bologna University. As a filmmaker, he won more than 80 awards in hundreds of festivals worldwide, writing and directing shorts, animations, documentaries and music videos. He’s also a teacher of Cinema. Since 2013, he lives in Estonia, working as a freelancer with many customers worldwide.

Sayonara Film is a production and short film distribution company founded in 2016 by Adam Selo and Olga Torrico, with the aim of producing meaningful, modern and complex films, and a particular focus on powerful and fascinating creative documentaries. In 2017, Sayonara Film co-produced 13.11 - an anthology series of six shorts set in six European countries. The series was acquired by France Television. Among Sayonara Film’s last works, we find the short doc Les Aigles de Carthage by Adriano Valerio, a co-production with France and Tunisia, premiered at 35. International Critics' Week in Venice International Film Festival, and the short Gas Station, that also premiered at 35. SIC and that was awarded with Best Technical Contribution.