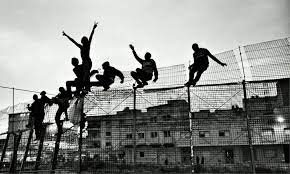 When a body is discovered in an Athens squat in an abandoned hotel earmarked for redevelopment by a huge multinational building firm, its status as a safe-haven for refugees, the homeless and the dispossessed is thrown into chaos.

The story unfolds in and around the abandoned Hotel Olympia, a self-governed squat in a run-down Athens neighbourhood, home to anarchists, refugees, unemployed Greeks, artists: a veritable tower of babel of the dispossessed. The Hotel is under constant threat of eviction by Orion, a multinational construction company that is trying to redevelop the neighbourhood.
When a dead body is discovered during a party, Tina persuades Yanis and Samira to cover up the incident, convinced the authorities would shut the squat immediately if they found out. Her decision sparks a chain of events none of them could have predicted and throws the very existence of the Olympia and all it stands for into chaos.

Screenwriter’s bio
Simon Coss is a Franco-British filmmaker and screenwriter. Aside from Babel: Hotel Olympia, he is currently developing two feature film projects, Ghost Song, a gay love story between a Greek fascist and a Syrian refugee and Madeleine, which draws on his experiences teaching juvenile offenders in France's largest women's prison. He also works as a documentary director and his films have been broadcast on ARTE and France Télévisions. His latest documentary, For Two Centimes More… (2021), tells the story of a French cooperative factory set up in record time to combat the shortage of surgical masks at the outset of the Covid pandemic. Wait&Sea, in Brexit's Troubled Waters (2019), talks about France, the UK, fishing, Brexit and why Simon became French. It was shown on French TV and selected for the Dinard Film Festival. Before moving into film, Simon worked as a TV and print journalist for 25 years, specialising in European politics.

Producer’s bio
Jack has been working at Sixteen Films for the past eight years – and now works as a producer at the company. Within the last year he has taken an associate producer credit on Cristian Carion’s My Son featuring James McAvoy & Claire Foy, and worked on Ken Loach’s latest film.
Previous to that, he was assistant producer on Ken Loach’s last feature film Sorry We Missed You as well as working on I, Daniel Blake, and the documentary Versus: The Life and Films of Ken Loach. As assistant producer Jack was closely involved in the development of these films, their production, and moving on to become the post production supervisor.
Jack oversees the slate at Sixteen Films which in the last eighteen months has expanded into a diverse range of projects – seven feature films, three short films and two television series.