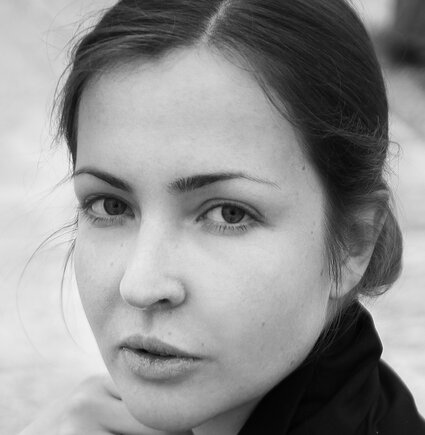 Julija Šatkauskaitė is an actress and a talent agent born in Vilnius, Lithuania. She has finished a master degree in acting at the Lithuanian Academy of Music and Theatre in 2014. From then on she has acted in numerous theatre performances and several films and TV series. She has been working with a legendary Lithuanian theatre director E. Nekrošius in many of his last productions. Currently Julija works as an actress at the Vilnius city theatre “Meno ir Mokslo Laboratorija” and theatre “Meno Fortas”. She is also acting in several upcoming Lithuanian feature films productions.
Julija started working as a talent agent in 2018, when she joined the Baltic Actors Agency. Before her the Baltic Actors Agency mostly worked with the Russian speaking cinema market. Julija was the first person to start exploring the possibilities of promoting and representing actors for the English speaking cinema productions. Currently Julija is representing over 20 exceptional actors from Lithuania and considering the possibility to represent talent from the whole Baltic region. Julija has represented actors for such productions as “6 Underground” directed by Michael Bay, “Thins Ice” directed by Jóhann Ævar Grímsson and Søren Stærmose, “Caliphate” directed by Goran Kapetanovic, “Spy Wars” with Demian Lewis and “Ghost Bus Tours” directed by Ben Wilson.