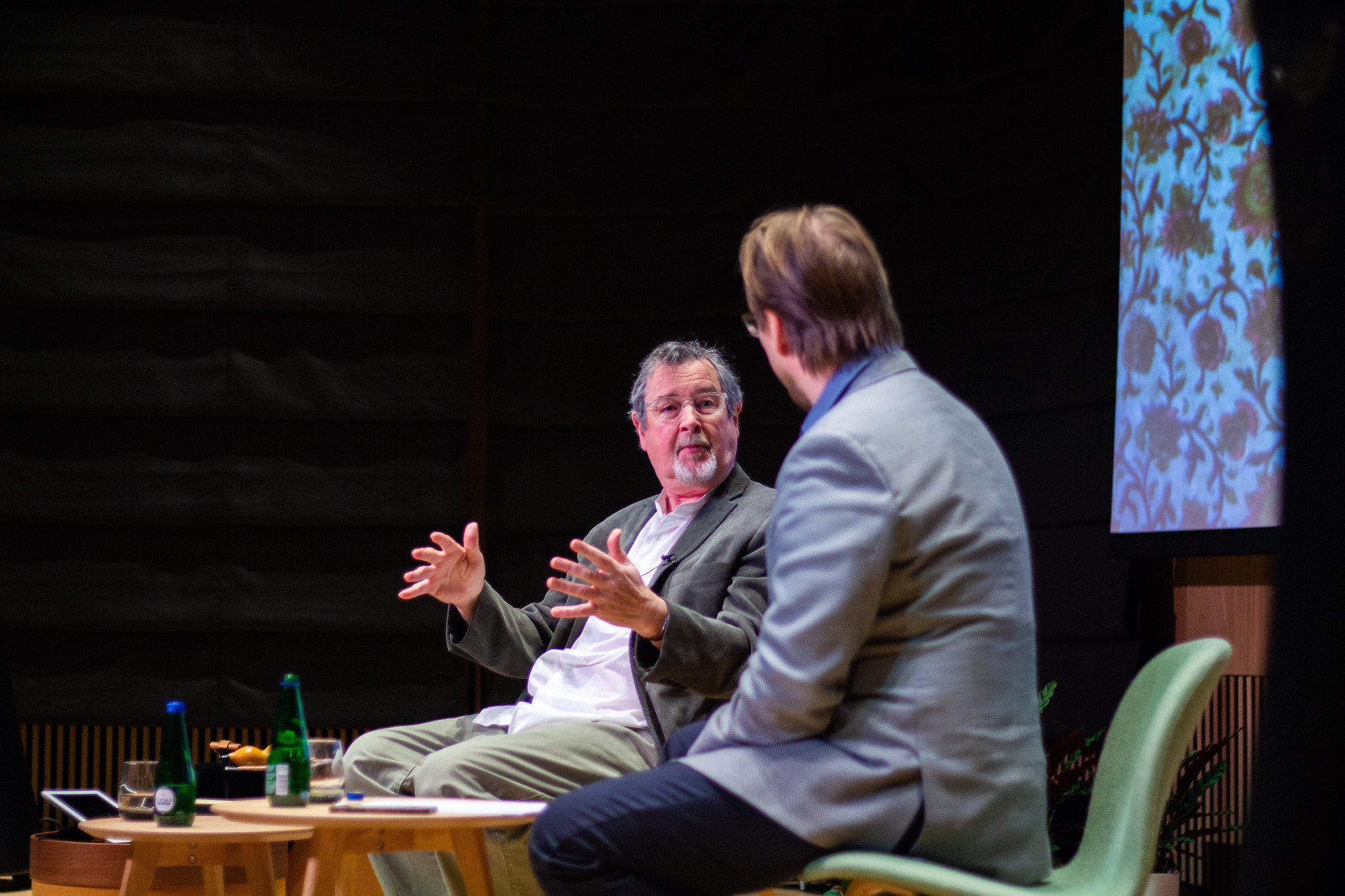 Over the past few years, Music Meets Film (MMF) has evolved to become a recognizable brand and a highly anticipated series of events, laid out in a three-day program every November. The aim is on one hand to bring competency and experienced professionals as guest speakers for masterclasses and workshops to Estonia for the local industry to benefit, be it institutions, companies, professionals as well as students, and on the other hand to develop a platform of a meeting place and for creatives to extend their network in the film – and film music professionals.

MMF brings together composers and directors; from music and sound creatives through to producers, agents, and the wider music and film industry. It aims to build bridges between creatives, grow as an interdisciplinary meeting place, and encourage new International collaborations.

In 2021 MMF will mark its 10th anniversary and the events will take place during 21-23 November in Tallinn and Laulasmaa. You can catch most of the programme, events marked with asterix (*) also online via industry.poff.ee.

MMF's traditional opening panel touches current trends in the film and scoring industry. Composer Mihkel Zilmer, director Mike Newell and cinematographer Alar Kivilo will share their experiences from their extensive film and scoring careers and will also delve into the inevitable - on how Covid is shaping and changing the industry. Moderation by Kaarel Kuurmaa

A conversation between cinematographer Alar Kivilo and director Scott Hicks, who take us on a universal journey of manoeuvring working life, finding clues and stimuli to pull you forward whilst avoiding futile rabbit holes... Moderation by Michael Pärt.

The second day of Music Meets Film takes place at Arvo Pärt Centre. The bus to Laulasmaa leaves in front of the Nordic Hotel Forum at 9:45 in the morning (gathering from 9:20). The bus comes back from Laulasmaa at 9:30 in the evening, half an hour after the screening of the Ingmar Bergman "Saraband" has finished. The final stop will also be in Tallinn in front of the Nordic Hotel Forum. If you would like to catch the bus ride to Laulasmaa, please sign up here

Whilst an idea can be just hinted at without extended context needed, censorship often doesn't stop the original message from reaching its intended audience. Why does this happen and how does this work in music and film music? Scientist and mathematician Tarmo Soomere & musicologist Kerri Kotta discuss the coexistence of music within a landscape of ideological surpression.

Film scholar Jan Holmberg explores the facinating effect Richard Wagner's creative legacy had on establishing the format of cinema itself and music in films. From his own proto-cinema to how his music founds its way to early films, the '30s and '40s in Hollywood and being directly quoted in films.

Director Nina Degraeve takes us to the musical universe of "Loveless" by the Russian filmmaker Andrei Zvyagintsev's. Through his work we will see an introduction to the meaning of music and the implication of silences - and the resulting heightened moment of the narrative.

15:30 - 17:30 A Lecture-Recital by Anyssa Neumann: Classical Music in the Films of Ingmar Bergman*

This lecture-recital by pianist and film musicologist Anyssa Neumann explores the appearance, function, and meaning of classical music in Bergman's work, from his earliest films in the 1940s to his last in 2003. This presentation will feature musical scenes from a wide selection of Bergman's films, alongside live performances of piano works by Bach, Beethoven, Schubert, Chopin, Schumann, and Liszt.

Saraband (2003) is Ingmar Bergman's final film, standing at the end of his six-decade-long artistic journey. An unflinching chamber drama centered around the conflict between a young cellist and her family, the film demonstrates how music can be part of both the narrative fabric and the technical apparatus, functioning as structure, sound, act, presence, content, and even a kind of religious philosophy, combined into a sophisticated whole.

Taking as an example Andrey Tarkovsky’s masterpiece, “The mirror”, the master's son Andrey A. Tarkovsky will analyze its visual structure in a close relationship between image sequences, the soundscape and the use of music in order to establish a link between musical composition and the creation of a cinematic image. Moderation by Sten-Kristian Saluveer.

The intuitiveness of composing on paper with all the benefits of the DAW? We are inviting David Hearn from Staffpad to examine how visual interfaces and software can support the composing experience without forcing a fundamental change in workflow. Headsup composers, songwriters, arrangers, orchestrators, teachers and conductors!

Composers Tuomas Nikkinen, Hendrik Schwarzer and Mihkel Zilmer lead the conversations on all aspects technical. What gear do we use, which machines work best, plugin finds - and which workflow makes a composers' setup work best. The conversation might get a little nerdy, and the intention is to strike up a dialogue with the audience! Moderation by Mikko Raita.

Mike Newell and Alar Kivilo share their trials and tribulations - and how they’ve come out of it stronger!

To celebrate 10 years of Music Meets Film, we are announcing and introducing the MMF Award — designed to support and promote talented young composers from the local region. Here, we will announce this year's winner, and award their prizes of EUR2000 and an Orchestral Tools virtual instrument license. Moderation by Hendrik Schwarzer.

Round off the festival with a relaxed evening of music, drinks, and cultivated conversation with fellow composers, film makers and MMF guests. Make new connections or catch up with old friends — this informal happy hour might mark the end of this year's Music Meets Film, but it could also be the start of a great night out in Tallinn...

*Event is streamed on industry.poff.ee

Participation is open to anyone who is 30 years old or younger and living in Europe.

Participants are invited to compose an original soundtrack to a video clip, to demonstrate their composition skills and musical creativity. The clip is kindly provided by BFM – Tallinn University Baltic Film, Media and Arts School. Access the clip HERE

The finished work should be uploaded either to a participant's Soundcloud or Youtube account. Be sure to use the hashtag #mmfxotcontest2021, as this is how we can track your work. Please also announce your work and a link to your entry to argo.vals@poff.ee.

The award for the best piece of original music is EUR 2,000, plus a package of virtual instruments from Orchestral Tools that includes their acclaimed Tallinn collection.

The winner will be selected by a jury of music and film professionals from this years’ Music Meets Film panelists, and announced on 23 November 2021.

Mike Newell is an English film and television director and producer. He won the BAFTA for Best Direction for Four Weddings and a Funeral (1994), which also won the BAFTA Award for Best Film, and subsequently directed the films Donnie Brasco (1997) and Harry Potter and the Goblet of Fire (2005) after what Newell became the first British director to helm an instalment of the hugely popular franchise. Newell’s recent feature credits include Prince of Persia, Great Expectations and Guernsey.

Jan Holmberg is CEO of the Ingmar Bergman Foundation. A Ph.D. in cinema studies from Stockholm University, Holmberg is the author of books (on early cinema, film in the digital era and Ingmar Bergman), as well as numerous articles on cinema, visual arts, literature and music. In 2018, he was editor-in-chief of Ingmar Bergmans skrifter (“Ingmar Bergman’s Writings”), a 40+ volume edition published by Norstedts of Bergman’s film scripts, prose, essays and journals.

Anyssa Neumann is a concert pianist and musicologist based in Sweden, where she holds a postdoctoral position at Uppsala University in the Engaging Vulnerability Research Program. She earned her PhD in musicology from King’s College London in 2017, focusing on pre-existing music in the films of Ingmar Bergman, which she has developed into a lecture recital and presented in the USA, Canada, England, Spain, and Sweden. She has guest lectured on film music topics at the City University of London, Stockholm University, Hebrew University, and the University of Washington.

Nina Degraeve is a Belgian film director. Her first school documentary was on the Belarusian painter, Igor Tishin, after which she directed Boris Lehman: portrait of the unfinished. She worked as a trainee production assistant at Les Films du Fleuve under the supervision of Jean-Pierre and Luc Dardenne. Her graduation piece, the film Ray Richardson: Our side of the water has been showcased in festivals around the world and won 8 awards. Degraeve’s thesis was on the cinema of Andreï Zviaguinstev that led her to write a book about his work. Currently, she is preparing a feature documentary "From screen to canvas".

David William Hearn is a composer, arranger, producer, multi-instrumentalist, designer, entrepreneur and developer. He has written and produced music for film, television, popular artists, advertising and spectacular live events. Hearn is also known for his work supporting successful composers on their large scale projects, from additional orchestration and production, to score mockups and mixing. He has created professional software Staffpad, a music notation app that other composers use around the world to write music with on a daily basis.

Every year MMF highlights a number of focus topics such as copyright, licensing, plagiarism, music spotting and a plethora of creative insights and study cases from composers and film professionals alike. The MMF programming is curated to establish a common theme amongst all topics, the lowest common denominator – the creative impulse.

Over the years a number of prominent keynote speakers, A-list film directors and film composers have shared their knowledge and life’s work with MMF audiences.

During 2018-2020 MMF has welcomed various acknowledged speakers including